Business Lessons from a Radical Industrialist 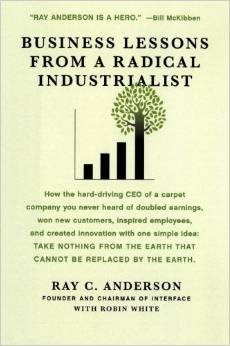 In 1994, Ray Anderson was 60 years old and at the top of his game as founder and CEO of Atlanta-based Interface, Inc., a modular carpet company that makes those clever carpet tiles that you may have underfoot in your office or coveted via the company's residential brand, FLOR.

That was 17 years ago - before 'green' was the compelling business imperative that it is today (for reference, oil was then $18/bbl), and frankly, the environment was nowhere on Ray's radar.  An Interface associate asked Ray to give a speech to a task force that was forming to answer customer concerns about environmental impacts, and though he had not a clue what he would say, he accepted.  As the date for the speech grew closer, he began to sweat -- and then Paul Hawken's book, The Ecology of Commerce, landed on his desk.  The rest is green business history -- Ray read the book (he's called it a 'spear in the chest' epiphany), his outlook was radically transformed, and he gave a speech that would put the petroleum-dependent carpet company on a path to zero environmental footprint.

What's happened in the intervening years has made Interface the poster child for green business, and Ray's become a bit of an eco rock star. He ditched his gas-guzzling Jaguar in favor of a Prius, built an off-the-grid home, and today, at 76, his life is radically different than what he would have imagined for himself at age 60.  This is his story.